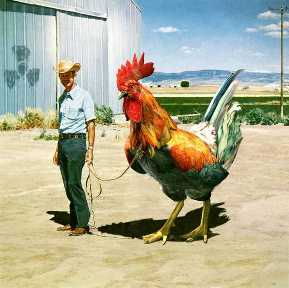 Well, that's what it is!

Huge cocks are overrated anyway. I prefer standard government issue like my own, though maybe a little bigger. ;-) Convertables too! I totally DESPISE genital mutilation, especially without said owner's consent! Plus, foreskins are fun to play with. :-p

I wonder if Eric's cut or uncut. Probably cut. I'll find out at some point I hope. The bastard still hasn't called me. HE wanted to spend time together on Saturday, said he had to work an hour or so that morning, then would be here at 10, 10:30 tops. (No pun intended.) At 11 he called saying they needed him longer than expected. I replied with something lame like, "Well, I'll see you when you get here." I didn't tell him that I had a special lunch prepared for during our refractory period. I certainly didn't intend to lose the opportunity for whoopie uninterrupted by fear of getting caught. So he didn't call again, nor did he ever show up. He still hasn't called. I'll be damned if I call him. I was stood up. He knows that. Was it cold feet over getting jiggy with another man. I don't know if he's experienced, curious, or just shy. Maybe he's embarrassed over all the money he owes me ($700). Maybe it had something to do with my difficulty groping him that day -- I blamed his baggy shorts, but maybe he's just... difficult to find if you get my drift. Whatever the case, he stood me up, and the longer he waits to rectify it, the more guilty he's going to feel. I won't call him though. It's his deal and I ain't gonna seem like I'm begging, no matter how sexy he is or how fantastic a kisser he is. I still want to get in his pants though. This morning's masturbation fantasy involved him lying on his back and my parking on his stiffy, me bending for kissing and his having my earrings available to work on while thrusting upward. Oy.

We have a 4th dog in the pack now. She's Mary's dog, Mary being the LO's mother. The dog is good, smart too. Housebroken and all that. But she doesn't have a sense of the borders of the property like the other 3 who learned as pups never to leave the yard and so she needs to be kept on a tether. It's a drag having to attach to her to a tether whenever she goes out. She does what she can to fit into the pack, like alarm barking or joining in with the others when they start. Tarq, the border collie, accepted/tolerated her immediately. Nooms, an old, 100# lab-husky mix, couldn't give a shit, then Sherms, the chocolate lab, has had alpha issues, snarling, snapping, etc. Tana, the new kid, defers to him, but for the week that she's been here he's relaxed a lot and she keeps her distance. Still, they're of the same age (7) and each in desperate need of a playmate. It's a bummer. If only Sherms would get his head out of his ass.

I wear glasses now, as of yesterday. The frames I chose flatter me, but I still don't like something constantly affixed to my face. Plus, they're "progressive." I'm far-sighted in one eye and near-sighted in the other, so the top of the lenses correct for the former and the bottom for the latter, and the top and the bottom slowly grade into each other. It's very weird. There's a place along this progression for every progressive distance. What I need to learn/inculcate is the where what shit. I mean gain instinct as to how to bob my head to zero in on whatever it is I'm looking at. I will take practice.

I went for my annual shrink visit today. We had a good time. He's nice, respects my PhD, and doesn't talk down to me. There were a couple med shifts. I had suspected that I was in a depression trough and he confirmed. I gave him an offprint of my latest book. He really appreciated it. I'm to return in 4 months to report on how this new shit is doing.

There was a memorial service in lieu of a funeral for the LO's mom a few days after she passed a couple months ago -- she was cremated. This Saturday will be the celebration party for all those who knew her. She was like my 2nd mother for 22 years now. I miss her. The LO's (fraternal) twin brother, who is all that he has left for family has flown in from LA. He brought his wife (whom I loathe) and 2 daughters, the eldest of which is cool, the other should have been exposed at birth, so getting together with them for me is a 2 out of 4 proposition. The calculus ultimately sums up to a dreadful experience for me.

I wrote this a few days ago and clearly forget to upload it. Duh. I have fresh ramblings -- shit that's random in extremis -- which I'll write a bit about after I post this.

Current read: The Book of the Dead by Cromwell