Eric and other crazy shit

At least for the past several years, late June has been bringing big changes, especially beginnings and endings to my personal relationships. Late June of '03 saw the end of JWB. (What the fuck was I smoking to get involved with that douchebag?!!!) The following June Tanner and I embarked on a personal relationship that culminated 2 years later with my finally accepting his offer of his cherry, then a couple days after that the end of our relationship -- forced by his bull-dyke mommy. Now honestly, at the tender, innocent age of 22 did you allow your mother to dictate who may and may not have as friends or lovers anymore? Tanner does. He'd badgered me to fuck him for 2 years. If I were the fiend she convinced him I was, why did I hesitate for so long? Clearly I could go on about it, but not now. The short version of the aftermath is that after he took his major, lezzie inspired dump on me, he's only contacted me or been nice when he's wanted something. Well, it's late June again, so here he is with emails all chipper and such as if nothing... and wanting letters of recommendation from me of all things! His efforts at buttering me up are transparent. I know he knows what buttons to push to get me to do anything. His butter has gone rancid at this point, though. He's figured that out too. He knows he's transformed his greatest ally into... not his greatest enemy, but someone who's sick of being taken advantage of. Which is basically the case. I'll never be his enemy.

So here I am, sucker of the century, getting sucked in again by another needy dude. Eric. Here's that dead ringer pic again: 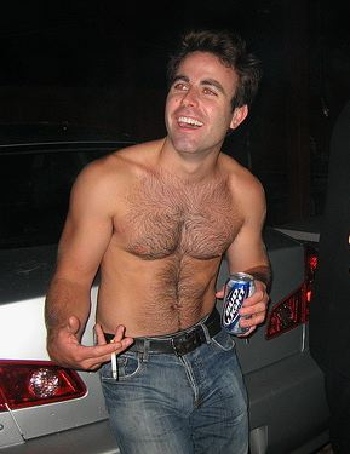 Eric is early 30s. I met him a couple months ago via Sam. He's one of her friends and was helping her packing when she was moving. I like him. She does too. He likes me. A lot. He is engaged to a woman who has 2 kids (2 and 4), one of which is his. He lost his license last year on a DUI charge, so now he rides a scooter. His passions are landscaping and photography. I've employed him to do the former. He's great at it. He can hold an intelligent conversation. He's aware of you and will refill your glass a nano-second before you realize you want it re-filled, but looks shamed when you return the favor. He may be a player, but if he is, he's an unconscious one. I need to keep mindful -- I have a really bad habit of forming toxic attachments.

He was here Friday and at his departure hug we somehow went from first to second base, so our partings when alone have gone from pecks to tongue to grope. True, I had to guide his hand down to my crotch, but that's the way things have always been with him. From the day we met he's flirted with me in very suggestive ways, baiting me to make a move, and when I do, he's more than responsive.

For instance, a couple weeks ago we had our first kiss. As he was leaving he stood there staring longingly at me, waiting for his customary hug and peck on the cheek. We shared it, then he still stood there staring while our faces were 6" apart. His lips twitched and his blinks became very long. I took the bait and gave him a peck on the lips. He still stood there. I gave him another peck, a longer one, and somehow (instinctively?) my tongue lightly grazed his lips. Well, that broke the seal and suddenly his tongue was inspecting my tonsils. Our hands went to the backs of each other's heads and I could feel him melting in my arms as he ... how should I say it? ... devoured me. It was an interesting shift. Our hugs had become embraces over time, always gently strong if that makes any sense. Strong in a manly way -- the way men hug, the way it feels when I hug my straight male friends. Hugging my gay male friends feels like, well, the same as hugging me straight female friends. (I have no lesbian friends, so I couldn't comment on that.) And at what point does a hug become an embrace? Is it a time thing that differentiates the two, or the distance of the hips? At first he and I wrapped arms around each other for a second or two, then longer, and longer, and longer. Our hips grew closer and closer over time as well. At first it was the classic 'granny hug', each leaning forward enough to touch chests briefly and place heads side to side. Then we started sharing cheek pecks on separation. Gradually there was no leaning anymore. This time the cheek peck migrated. He baited me and I took the bait. Clearly it's what he wanted. A green light.

So after that it was over a week before I even heard from him again, then a few days after he made that call I saw him again, namely this past Friday. Or was it Thursday? Anyway, this departure hug went straight (so to speak) to embrace and his tongue had no hesitation saying howdy before mine could. Hip distance? Our feet were planted interstitially, so basically we each had our dicks pressed against the other's thighs. As we shared a very hungry kiss my hand went down to feel him up. He wanted to do the same -- somehow I could sense that, but he hesitated for whatever reason, so I guided him, and when I did he groped me like a champ. I was half staff at that point and, even though my endowment is standard issue, he found me easily and massaged my shaft quite hungrily. I wanted to return the favor, but his shorts were so baggy that I had a hard time even finding his crotch! Just as my fingers found him plumping our embrace found its time up, so I really didn't get a chance to measure what I have to look forward to. Of course I've jerked off imagining us getting it on, but the dimensions of his pecker don't really matter to me. To be honest, I hope he's average, which he's hinted at his being. My ass has been exit only for 5 years at this point and I'm not interested in butt trauma. I do want him to sock it to me though. I need to get laid!

When he was here a few days ago, before our second base session he said he wanted to spend yesterday (Saturday) together and do something, by which he meant hit third base if not a home run. He said (without prompting) he'd get Jenna, his bride-to-be, to take care of the kids, and that he had to work all day, which he did have to go to work, but, according to him, only for an hour. He'd be here by 10, 10:30 tops. I cleaned up the place, not to mention myself, got a nice lunch ready, then no Eric. He called around noon to say that he was still at work and they wanted him to finish his task at hand before he could leave. I said OK and looked forward to seeing him as soon as he could get away. Guess what? He never appeared. Nor has he called yet. (It's Sunday morning.) I spent yesterday all dressed up only to be stood up. Nary a word. I felt like a fool, and rightly so. I am a fool.

Money is involved as well.

Eric has been coming on to me since we met. His flirtations have been genuine and his kisses and gropings haven't been an act. He's either closet or like virtually all the Southern men I've been with: straight in lifestyle, but craving cock while having wife and children for show, so there's (poor) wifey minding a nice (plastic) suburban house with pretty kiddies on tricycles on a sodded lawn. All for show, while what he really wants is dick, but Southern culture has issues with homosexuality. It's fahn -- not a word, just say it out loud and you'll understand it -- just don't talk about it. In other words, 'don't ask, don't tell'. I've grown sick of satisfying Southern men's needs. Eric isn't like them exactly. He's complicated. So am I. I like him. I see how I could fall in love with him. But I'm in love with no one now. I don't want to be. It only leads to pain.

Money. Eric wanted to borrow a couple hundred dollars last month. I'm on what amounts to disability at the moment, but could lend it to him. He's been doing work around here at my house at $20/hr. He's a good worker, and in straits, so why not? A few weeks ago he asked to borrow $200. I gave it. A few days ago he asked for $500. I had to check my account online to see if I had anything to lend. I get paid direct deposit monthly and this has been an expensive month. Everything came due at once: property tax, personal property tax, water, house insurance, car insurance, the usual mortgage, electric, gas, credit card, yada yada. The amount of money I've lent to people who are 'going to pay me back' now amounts to just over $13,000. I've kept track. And I had to roll coins last week to buy cigarettes! The well is dry.

Eric means well. I can't not support him. Emotionally I mean. He's struggling. So am I now. There's compassion, generosity, and idiocy. It's a spectrum. Were I a Christian, as in following the teachings of Yeshua bar Yosef, I'd be in line. If I were a Christian according to 99.9% of those who self-identify as Christians, I'd be $13k+ ahead. Alas! I'm a Buddhist, which leaves me more 'Christian' than 'Christians'. A couple dudes showed up at my door the other day with pamphlets in shirt pockets. Without any greeting they asked what church I go to. I wanted to say, "I attend St. Mattress for matins religiously.", but I didn't. They wouldn't have gotten the joke, and (scary Calvinist) Presbyterian as they looked, or at least hard-shell Baptist, they wouldn't have known what matins are anyway. Instead I told them thanks for your concern for my soul. They wanted to engage conversation. I didn't. I simply told them that I wasn't a Christian. One said openly to the other, "He doesn't believe in god and is going to hell." I replied unasked, "Are you two going to hell?" He predictably said, "No! We have taken OUR LORD JE..." I interrupted with "Gentlemen, I respect your right to believe whatever you want, be it John Knox (which tilted their heads) or the Tooth Fairy. Freedom of religion is what makes this country great. So is the First Amendment. I respect your right to have your beliefs, please respect me to have mine." In response, one reached to give me a pamphlet, saying, "The LARD..." Clearly they were deaf as posts, so I just gently closed the door.

Ironically, a few hours later, a mendicant appeared at my door. He'd knocked before. Not long ago, in fact. All I had was a tenner that first time, so I gave it to him and wished him well. It left me pretty much broke. So this next time, yesterday, when he came knocking there were four large dogs behind me expressing their craving his liver on a stick. He asked if they bite. I just tipped my head to the side, he moved on, I closed the door, and felt guilty.

Current read: In Catilinam I -- Cicero