A month and a half since I've entered. I really do need to take time to 'dump'. Here come some random, SoC things.... 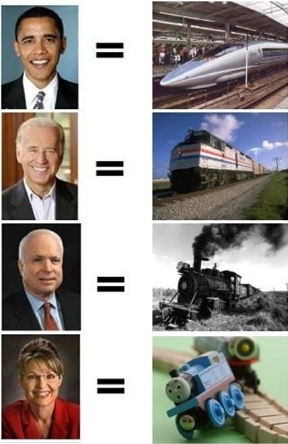 Whereas we're only 2 days off from freedom, I had to put that up. McCain -- I used to respect him -- has shown himself to be a whore and the REAL SCARY 10/31 trick is Palin. There's a vagina dentata if I eer saw one. Oh wait, vaginae dentatae are usually intelligent. This bitch is both VACUOUS and EVIL! So there's McCain with one foot dangerously close to the grave, and Gov. Clueless Avon Lady as successor? OMFG NO!!! And then there are the Supreme Court justices that will be retiring. HOLY SHIT!!!!!!!!!! The Court's already tilted to the right Can you imagine Queen Pailn's choices? (For one thing, women wouldn't have rule over their own bodies anymore, even if she had been impregnated by rape or her own father/brother.) I've never understood the whole deal where unwanted conceptions are forced to go all the way to term, then ignored by the self-righteous ("religious") law imposers. If life begins at conception as they believe, wouldn't that make miscarriage manslaughter?

You can step it back further. Menstruation is also manslaughter. That egg could have been a person! Pity the poor man who had even wet dreams. MURDERER!!!! So where exactly would they like to draw the line?

So my ranking is:

There's what's fore-foremost on my mind.

My own issues will have to wait. In the meantime get your ass out there on Tuesday and vote Obama!!!!!! 8 years of the current (Cheney) policy has lost thousands of lives, driven our economy into the ground, and made the once admired United States into the most hated. Te Cheney administration (or was the the Bush?) has raped us long enough. Stock market crashes. Gas prices are through the roof. Every other house I see is for sale... Enough rant for the moment. And then there's news about me! ~seth~